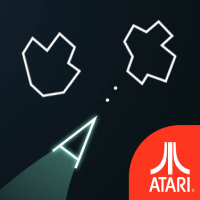 The world of Asteroids is an exciting one indeed, and luckily you are on the right site to find similar games on a daily basis. Visit Supergames.com and have your fill of fun! Play Asteroids, one of our best casual games!

Play Asteroids on Supergames.com, an iconic game which has greatly influenced the history of videogames, and try to spot all the games it has left a mark on. Its fun gameplay and unique ideas has ensured its legacy, and the fact that it is still being played today tells you everything you need to know about it.

In Asteroids the action is placed in space, and you have to simultaneously dodge and also shoot at incoming asteroids. The controls is what really sets the game apart, as you have to take into account the inertia of your movement, and if you aren't paying attention you will completely lose control of your aircraft. Another unique idea is how if you pass the edge of the screen you pop out on the opposite side, which adds a layer of strategy, but also adds a lot of uncertainty.

Play a classic game on Supergames.com and take a peek into history.