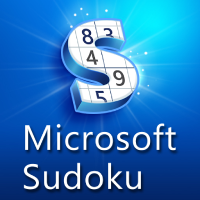 The world of Microsoft Sudoku is an exciting one indeed, and luckily you are on the right site to find similar games on a daily basis. Visit Supergames.com and have your fill of fun! Play Microsoft Sudoku, one of our best sudoku games!

If you ever wanted to try the game of Sudoku but didn't know where to begin we would recommend Microsoft Sudoku as a great starting point to start your journey into this fun logic game. To win a game of Sudoku you have to fill the 9x9 grid with numbers from 1 to 9, but you have to place the digits in such a way that they do not repeat on a row or on a column.

Why Microsoft Sudoku is a great introduction to this series is because it truly caters to a beginner, while at the same time introducing all sorts of helpful tools to help people who are more accustomed to Sudoku. Here you can find guides that show you where you should place the numbers, or if you just want a bit of help, they can just point you in the right direction, leaving all the figuring out to you.

Become a pro of Sudoku on Supergames.com and train your focus and concentration.

Try some of our other free games from our sudoku category for another fresh and unforgettable experience!