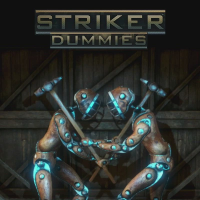 The world of Striker Dummies is an exciting one indeed, and luckily you are on the right site to find similar games on a daily basis. Visit Supergames.com and have your fill of fun! Play Striker Dummies, one of our best fighting games!

Enjoy a fun physics game and fight to the finish in this intense game, where you have to hammer your opponents into oblivion! The rule is simple in the underground fight club, and that is to make sure that you are standing at the end of the fight.

Duke it out against a human opponent or against the AI and make sure that your hits always strike through, because the fights can get quite hectic at times. The graphics really sell the idea of a gritty underground fight arena, all you have to do is step inside and fun. Play now Striker Dummies and become the best!

Try some of our other free games from our fighting category for another fresh and unforgettable experience!