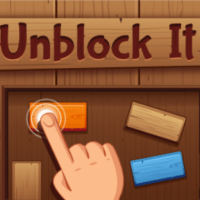 The world of Unblock It is an exciting one indeed, and luckily you are on the right site to find similar games on a daily basis. Visit Supergames.com and have your fill of fun! Play Unblock It, one of our best casual games!

Unblock It is a challenging puzzle game where you have to move all the wooden blocks in such a way so that the blue block can reach the exit. Ideally you do it in as few moves as you can. To do this, you have to take into account the varying lengths of the blocks, as well as their orientation, but also think ahead every move, because you can get stuck. If you do, you can always restart the level. Or you can use the hint system that Unblock It provides to give you some help whenever you need it.

With easy to understand rules and no timer to add a lot of intensity to the game, Unblock It is a great game to give your brain a workout, but also to relax, so come and solve all of its levels on Supergames.com.