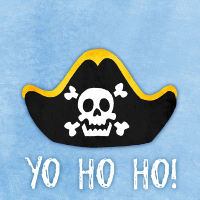 The world of YoHoHo.io is an exciting one indeed, and luckily you are on the right site to find similar games on a daily basis. Visit Supergames.com and have your fill of fun! Play YoHoHo.io, one of our best .io games!

Get ready to plunder and have fun in YoHoHo.io, the pirate battle royale game! As with other .io games, you have to survive for as long as you can, while collecting the coins and killing the enemy players. If you manage to defeat a player you will collect all their treasure. This practice of stealing the treasure of your foes dates from far back and Romans have famous sayings regarding this, so the pirates adopted this as well. And in this game, so should you!

But be careful, because the bigger you are, the bigger the target on your back becomes and after you have gained enough coins a lot of players will be coming to get your treasure! Use your wits and reflexes to survive as long as you can and become the ultimate pirate!

Join the multiplayer fun on Supergames.com!

Try some of our other free games from our .io category for another fresh and unforgettable experience!